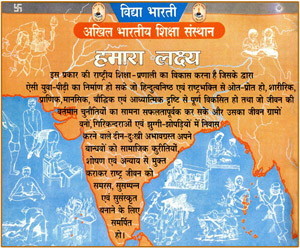 The child is the centre of all our aspirations. He is the protector of our country, Dharma (Religion) and culture. The development of our culture and civilization is implicit in the development of the child’s personality. A child today holds the key for tomorrow. To relate the child with his land and his ancestors is the direct, clear and unambiguous mandate for education. We have to achieve the all round development of the child through education and sanskar i.e. inculcation of time honoured values and traditions.

This was the dream which, in 1952 inspired some RSS workers to take up education of children as a mission of their life. The people engaged in this noble task of nation building through proper education of younger generation, laid the foundation of the first school at Gorakhpur in a building rented at a monthly rent of five rupees. After due consideration, they named their school as Saraswati Shishu Mandir-Temple of the Goddess Saraswati dedicated to the children. Thanks to their zeal, dedication and hard work that such like schools began to be established at other places also.

Prior to the Gita school which was started at Kurukshetra in 1946. The foundation stone of this school was laid by Shri M.S.Golwalker- revered Shri Guru Ji. The number of such schools increased rapidly in Uttar Pradesh. A state level Shishu Shiksha Prabandh Samiti was formed in 1958 for their proper guidance and planned development. Good education & sound sanskars at the Saraswati Shishu Mandirs earned for them due recognition, honour and popularity in the society. They spread in the other states also. Consequently Within a few years many schools had been established in Delhi, Madhya Pradesh, Andhra Pradesh, Bihar & other states. People began to send their children to these schools in preference to Christian convent-schools and over so- called public schools. In Saraswati Shishu Mandirs the children could learn about their Hindu culture. State level committees were set-up in other states also as the number of schools began to increase there. Punjab and Chandigarh had a Sarvhitkari Shiksha Samiti while Haryana had Hindu Shiksha Samiti,The formation of all India body came in 1977 as a natural corollary of this process. Thus Vidya Bharati was established with its Registered office at Lucknow & functional headquarters in Delhi. All state level committees were affiliated to this Vidya Bharati Akhil Bharatiya Shiksha Sansthan.

Except Lakshdeep and Mizoram in the whole of the country, there are more than fifty state and Regional Committees affiliated to Vidya Bharati. This nationwide Endeavour of Vidya Bharati for the spread of education through network of educational institutions needs financial support them the society to make them viable, so as to impart education and environment for all round development of Children i.e. physical culture mental, emotional and spiritual development.

Vidya Bharati institutions function under a variety of names like Shishu Vatika, Shishu Mandir, Vidya Mandir Saraswati Vidyalaya, Higher Secondary Schools, Training Centers and Research Institutions. These are located in towns and villages, tribal belts and hilly terrains and even in slum localities. The number of schools, students and teachers is continuously increasing. Consequently, contact with parents and the Hindu society at large is also growing and is progressively influencing every section of the Hindu society. Vidya Bharati is today the largest voluntary educational organization in the country. Basis of Vidya Bharati Educational Renaissance-Hindu Philosophy of Life.

Vidya Bharati has firm opinion that education will be useful for a person and nation at large which has its roots in Hindutuva. So it is crystal clear that revival of Hindu Philosophy is the be-all and end-all of our educational Renaissance. The aim of education and the basic concepts of the development of the personality of the child are based on this philosophy.

Psychological needs of the child should form the very basis of educational Training. Even after fifty years of independence the prevalent system of education in India has its roots in Western way of fulfillment of life, But according to Hindu Philosophy, the all-round development of the personality of the child is not possible without spiritual development. The Western philosophy based on the concepts of Darvin & Trevd can’t impart fullness to life. That is why Vidya Bharati has laid maximum emphasis upon Bharatiya psychology and made it the very basis of her system of education baptized as ‘Saraswati Panchapadiya Shiksha Vidhi’ These five steps are : 1. Adhiti, 2. Bodh, 3. Abhiyas, 4. Prayog, 5. Prasar-swadhyay and Pravachan and the philosophy of all round development of child is based on unfoldmans of five koshas i.e. Annamaya Kosha, Pranmaya Kosha, Manomaya Kosha, Jyannamaya Kosha & Ananamaya Kosha as envisaged in our upanishidie philosophy.

The ultimate reality of this universe is God by whatever other names it may be called. God is eternal, omnipresent, omnipotent and omniscient. God cannot be seen but can very well be realized. We should have faith in the greatness of God and seek his grace.

Nature is bountiful and benevolent. Man has to be respectful and grateful to nature. There is a balance of various elements in the environment of nature. It is in the interest of man to utilize the natural resources in such a way that this balance is not significantly disturbed.

Man is not body alone. Apart from the physical levels, man has four other levels of existence known as Koshas. In modern terminology, they may be called five systems namely the body system, the energy system, the desire system, the thought system and the self system. It is the primary duty of man that he sincerely tries towards optimum and balanced development of all his five systems or koshas.

Performance of one’s socially prescribed duties without pride or prejudice; attachment or revulsion but with intelligence and dedication is the highest Dharma of an individual. What these duties are to be determined by the state, the society and the individual himself.

The divinity in man must be accepted and respected by the State and the society,they should ensure his autonomy in personal matters subject to the performance of socially prescribed duties by him.

The life style and life activities of an individual should be inspired by a sincere desire to help and serve others.

An individual must respect and obey the State which provides him peace and security of life and man should fulfill his obligations towards the society.